The autumn has come, there's hint of winter in the air. The nights have gotten darker and longer, and there's been rainy days too. Perfect weather for coding, one might say. And you know what, that's what's been happening in the silence of the coding chambers lately.

So here we are, flexing our coding and release muscles with a new, seemingly unexpected release packed with a dozen of new features and a fistful of fixes.

Version 3.72 comes out as a beta release, and for starters it's only for Windows. More features are pending to be added, and OS X and Linux versions will follow in time. Not to worry, the story continues.

You'll find the full changelog and later in this post, but let's highlight some new features first. 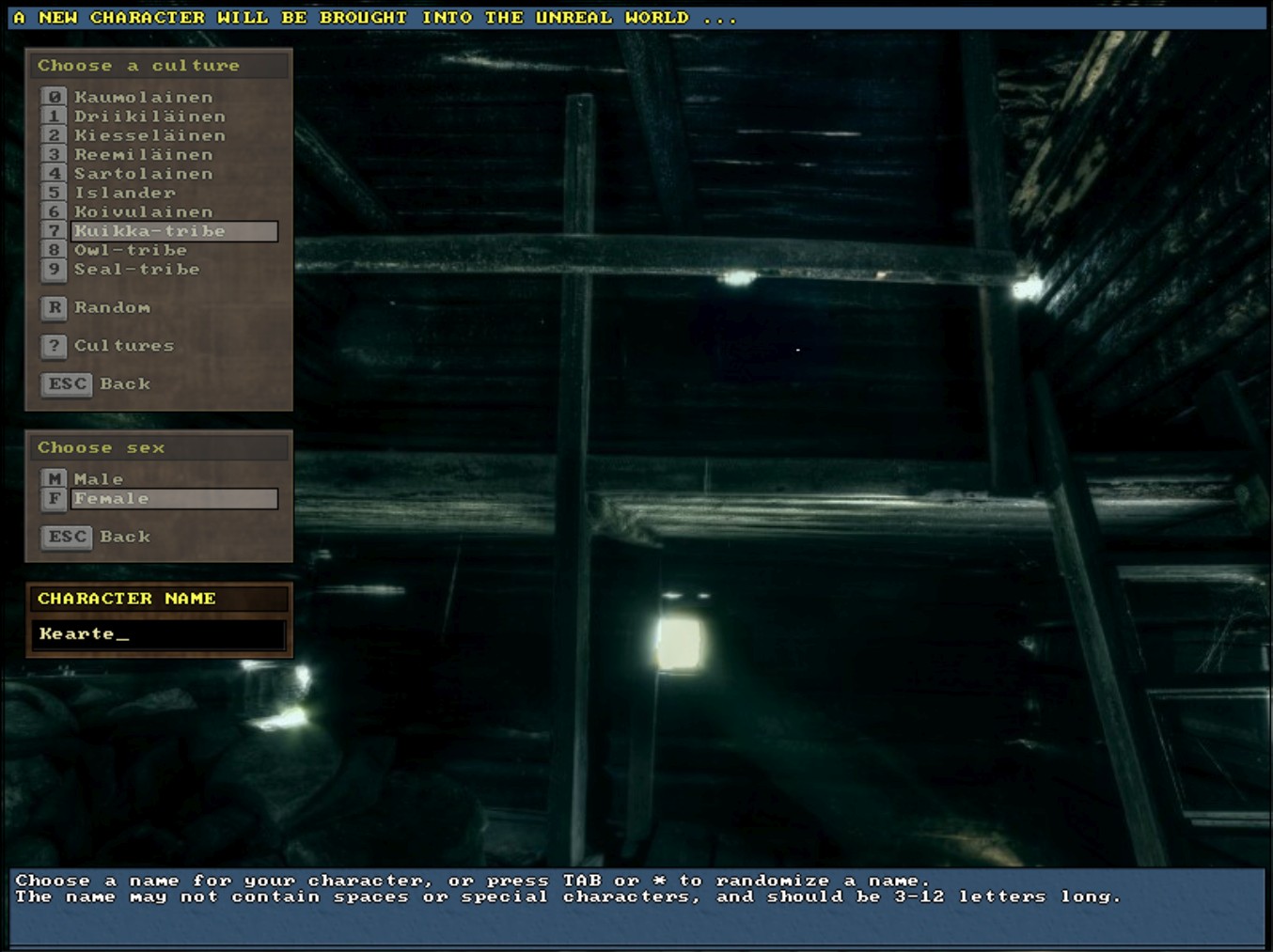 Upon character creation you can now randomize culturally relevant names for them at will. Here a Kuikka-tribe female is being created with a random name of her culture. 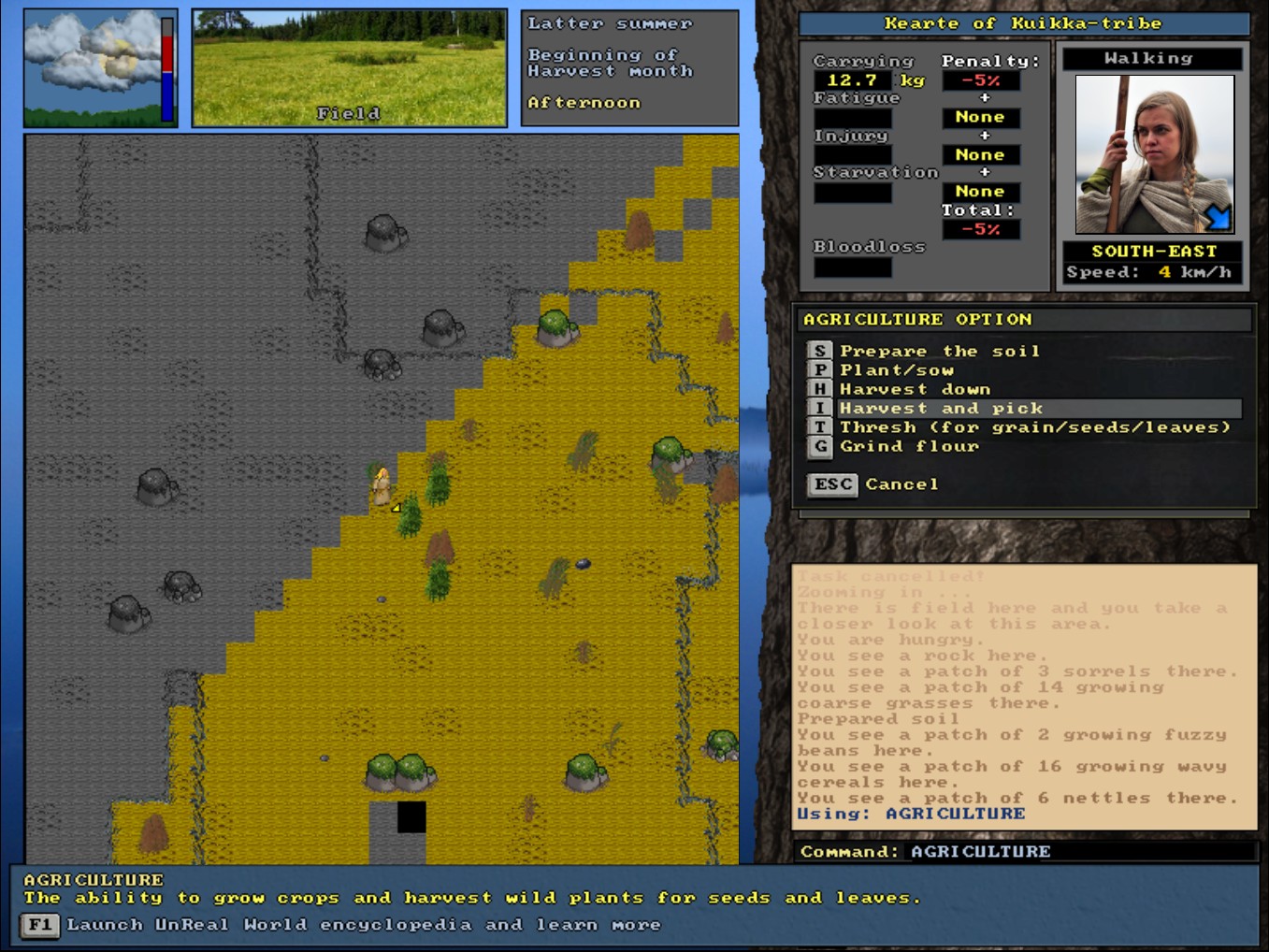 The good old harvest option only cut down the crops, but now there's an option cut and pick the crops to character's inventory at one go.

Upon creating characters and choosing their name you can now randomize a culturally relevant names for them. Pressing tab or asterisk (*) will bring up random names which you can then confirm with enter, or modify at will.

As the random character name option needs to know the culture and sex to pick up a relevant names these selections now come before choosing the name.

Previously there was no randomization in that regard, but Kaumolais male was always chosen. Otherwise this character creation mode mode remains the same assigning rest of the options automatically and starting nearby a village.

The good old harvest option only cut down the crops, but this newly added option also automatically picks up the harvested plants to character's inventory. For clarification the existing "Harvest" option is now renamed as "Harvest down" in the Agriculture menu.

- added: domestic animals in the villages will withdraw from player character's way

Moving towards a domestic animal will now make it to withdraw from your way. This is to prevent the character from getting jammed eg. in small buildings with village dogs.

- modding: increased maximum number of character portraits in each category up to 250.

- enhanced: message about the markers at wilderness location

Instead of given information about each marker with their own message now a summary of all the markers is given in one sentence. For example: "There is a shelter, set traps and a punt at this location."

- added: confirmation to start a fire on some occasions

You will be asked a confirmation to start a fire in the following conditions:
1. There are valuable items to be burned down where you are about to build a fire.
2. You are building a fire indoors at other than fireplace location.
These confirmations will prevent the unfortunate cases of accidentally setting your house or valuable belongings on fire.

From now on your companions won't ever start a fire at a location with items on the ground. Previously they might accidentally set a pile of items on fire.

- enhanced: rendering of the portraits

Updated SDL release includes a good deal of bugfixes which may have hampered some systems. - fixed: sacrificing food in a container mistakenly removed the container too

This bug manifested itself eg. in smoking and drying cookery recipes. After retrieving the auto-cut yarn you found it heavier than expected.

- fixed: extracting fibre from retted but not dried nettles was possible

This was a conversion issue within character profile screen.

Previously they were mistakenly considered being high up in a tree even if it was a mere sapling.

So, this is a beta release, things are still a bit under construction. You can download and install 3.72 beta for Windows at will, and should you encounter showstopping issues you can always download and install back the latest stable version (3.71).  However, we're quite confirmed that the new features of 3.72 beta are fairly stable already.

That's all, dear adventurers. Cheers and enjoy the surprise!