A downloadable game for Windows, macOS, and Linux

Into the Far North we shall take you ...

UnReal World is a unique combination of roguelike roleplaying game and survival simulation set in the Far North long, long ago. Throughout the years, UnReal World has been praised for its depth, realism, atmosphere and immersion. The game is completely open-ended and you decide whether you wish to lead a life of a fisherman, a hermit searching for the peace, a brave adventurer, a rough hunter, a trapper or a tradesman - and so on.

As a member of one of the nine different cultures you'll enter a detailed and enchanting iron-age game world in which northern folklore, knowledge and way of life play an important part. The world and mechanics of the game are highly realistic, rich with historical atmosphere and emphasized on survival in the harsh ancient wilderness.

A wide world with vast forests, mires and mountains to roam and watercourses to row is randomly and procedurally generated - and you can live off the land and explore it on very detailed level. Track animals, set traps, hunt with bows and spears, tan hides, go fishing, pick berries, cook food, sleep in a temporary shelter or build a log cottage, trade with the villagers, craft items, interact with cultures near and far -- and so much more.

A few of the key features:

UnReal World is the longest living roguelike game of all times. It was first released in 1992 and has been continuously maintained and developed ever since. Over the years we’ve seen dozens and dozens of new UnReal World versions each of them being complete games of their own, and still there is no end in sight to working with updates and new versions. UnReal World available here is the third evolution of the game (3.*) and updates, enhancements and new features to it will follow.

In order to download this game you must purchase it at or above the minimum price of $8.50 USD. You will get access to the following files:

Can we get an Arch Linux package as well?

It's possible if needed, although this is the first being asked.
Doesn't the available Linux build here work on your end?

I am asking because you have v3.63 available on your website in Arch package format.  I am sure the available build works, but this would give us the ability to install it using pacman which makes the package easier to manage and takes dependencies into account.  Arch is a very popular distro and I am sure the community would be grateful.

Yes, on the website we have more distros directly supported. It's easier to maintain there on the custom downloads page as here on Itch the interface is by default toned towards "one download for one operating system" thinking - which is a common policy. But but we'll consider adding Arch package here as well.

I wanted to mention that I used the Ubuntu deb package labeled urw_3.71_amd64.deb and the version number listed on the title screen is 3.70 not 3.71 so you might want to correct this.

Just for extra safety; if you have an active character you wish to continue playing with, first locate the save file folder and make a backup! Then the updating should be as simple as just downloading the new version and installing it - the exact details of the process might vary depending on your operating system, so feel free to post questions if it doesn't work just like that.

Is there a way to claim an itch.io copy if we already purchased the game on steam?

Nope. For the game these two are separate and non-related distribution channels.
(UnReal World on Itch was mainly set up due the request by players who don't fancy Steam purchases.)

Will the game ever accommodate modern wide-screen resolutions @ 16:9 ratio?

I don't like the screen fill option that stretches the screen, it makes things look weird.

I played the free version a month or 2 ago on the website, and that is my biggest gripe. It looks solid other than that.

Yes, it's our intention to head towards 16:9 ratio. It's a huge task since the load of interface history is super heavy, but we try our best to get it scheduled and process initiated in the (relatively) near future.

No normal saves = no good way to experiment (not cheat) = no deep knowledge = no way to get good long term knowledge like in real life (for new players) = no wish to play. Period. Change this, please. Game depth is great, but game is inaccessible for permadeath haters.

backup your saves.
if your character dies, the save file is erased - if you backed up your file before, you can just copy it into the saves folder and keep on playing.

I wouldn't call it normal saves. It is definitely not friendly way to experiment in many (lots of) ways.

Save scumming is metagaming. If you want to metagaming use external methods.

Then playing again and again from start is metagaming as well...

And I mean not save scumming (like reverting bad consequences), but making learn-ahead time point and returning to it as many times as you need to learn variants of doing something (not outcomes!).

this is roguelike, so permadeath is a given, mandatory even imho

Since when does real life have saves or loading?

You experiment and pay the price. That's how you gain "long term knowledge" in real life and the game. What you want is endless do-overs so that you can in effect never lose.

That is not how a roguelike or real life works.

You understand it wrong. Do-overs is not what I want. I want to do a lots of fancy do-it-mad-way things at certain points and then summarize all experience and after all do what reasonable and live with consequences. In real life you learn all your life, all those years, and there are a lot of people who help you, and luck/quantum effects. But in game you have only limited time to learn what possible. So it's not fair to make player do reasonable things without getting a lot of back knowledge.

First of all, i hope this answer doesn't read hostile. It is really not my intent here to be contentious. I want more to offer solutions or explain why the game developers/ audience like or dislikes something.

Also Metagaming is playing outside the boundaries of a game. For example in Dungeons and Dragons, metagaming is using the knowledge that your character CANNOT have (Which is probably what you refer to here). Playing over and over again is not metagaming in a roguelike because it is intended as the playstyle used.

If you think in RL you get the tools to do something, then Google solutions... From what i hear here, i would say that what you want here is more a tutorial rather then saves with that explanation. Also if you do something experimental IRL, you have also a chance to fail and do your work over again. Sometimes with lifelong consequences. (Open up a company that fails as a example. You can gather the knowledge how you open one. But you have consequences if you fail)

My personal advice for you is: Play as you wish. Mod the game if it doesn't pleases you. And if you do not want to mod/ cannot find mods or not develop own, play another game if the issues are a deal break for you. There are plenty of games out there which targets different audiences ^^ (Also i personally think save scumming by replacing files is one of the alternate solutions to replace a save function)

Roguelikes are intended for people who like games with consequences of loosing or making good/bad choices. Experimenting is a wager of risk/ possible reward there and if you are ready to deal with the outcome.
----------------------------------------------------------------
And for the devs i also have a personal point: Make the game you want to make. That creates the creativity in game development. Making a game with an own characteristic can be a risk, but i find these more interesting then the non-risk-cooky-cutter games that we often see today from less risking companies. (CoD is a good example. These games are mostly the same because they do not want to take the risk that people dislike it. So they stick with what they think people know and are familiar with)

I already purchased the game on Steam after having downloaded the free version from your website many times over the years and now I purchased the game here too. I really admire your dedication and your tireless will to perfect this wonderful game even after all these years. Unreal World is a very unique game and has a unparallelled depth and freedom. It's a pleasure and a privilege to be able to support your work.

Is the itch version updated at/around the same time as the steam version? Or would purchasing off of steam be preferable?

We try to keep it about the same time, during the same day. Occasionally few day delays may come our way, but nothing major.

Would it be possible to get a .deb package for future releases?

EDIT: I installed the 3.62 with the .deb package and updated manually to 3.63 from the tarball... Tedious work but worked so far.

Unrealworld is more than just a game... But a 2 decade long adventure of two friends, exploring medieval Finland, and sharing it with us.

URW is both a piece of human and computing history... You definitelly should try it.

The screenshots do not do this game justice. It's incredibly deep and athmospheric. Like all good roguelikes it is very difficult and can be unforgiving at times(like real life stone age life probably was).

If you have the time to invest and enjoy slow paced survival simulations, this is about as good as it gets!

Any chance you all could offer a Steam key with Itch? I know Midboss does that. Just curious.

Some projects do that but  we like to keep them separate, as some like Steam and some prefer any non-Steam way to get the game.  The players have specifically asked to provide non-steam distribution such as itch.
(Also, if there was a Steam key included the Itch price also would need to be higher, comparable to Steam price, to play fair with the past purchasers.)

cool looking game i might give it a go. 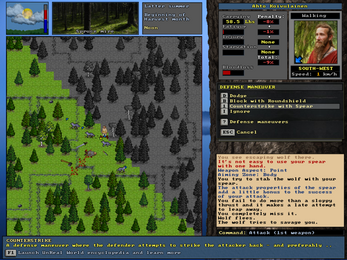 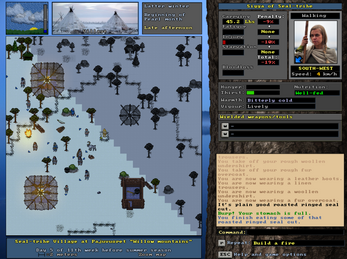 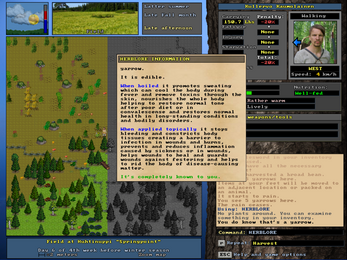 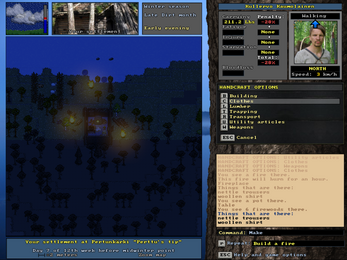 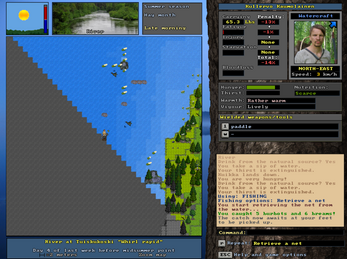