Sneak preview of textilecraft system with screenshots and additional insight

Time for a little sneak preview with our textilecraft test character Kuitu Kaumolainen. Some of the stuff mentioned here has been mentioned before, but a summary about textilecraft is in place now. With some sdditional insight and sidetracking included.

So, the biggest single addition to the upcoming version is featuring mechanics to extract fibres from certain plants and process them into yarn. For this, a new TEXTILECRAFT skill was created, and lots of spin-off features regarding fibre processing and cordage also followed. Fibres can be extracted from nettle, hemp and flax - which has been added as a new cultivated plant. Let's start from there ...

Flax is an old cultivated textile plant, but in Iron-Age Finland it wasn't even as commonly grown as hemp. One reason for this is that flax doesn't survive in the very north so in the game it's grown only by certain cultures south of Kaumo. As a curiosity, the finnish word for flax ('pellava') originally meant the nettle plant ('nokkonen') which speaks about importance of this age-old wild source of fibre.
But nevertheless, flax is in the game now and it can be grown, harvested and processed for fibre. 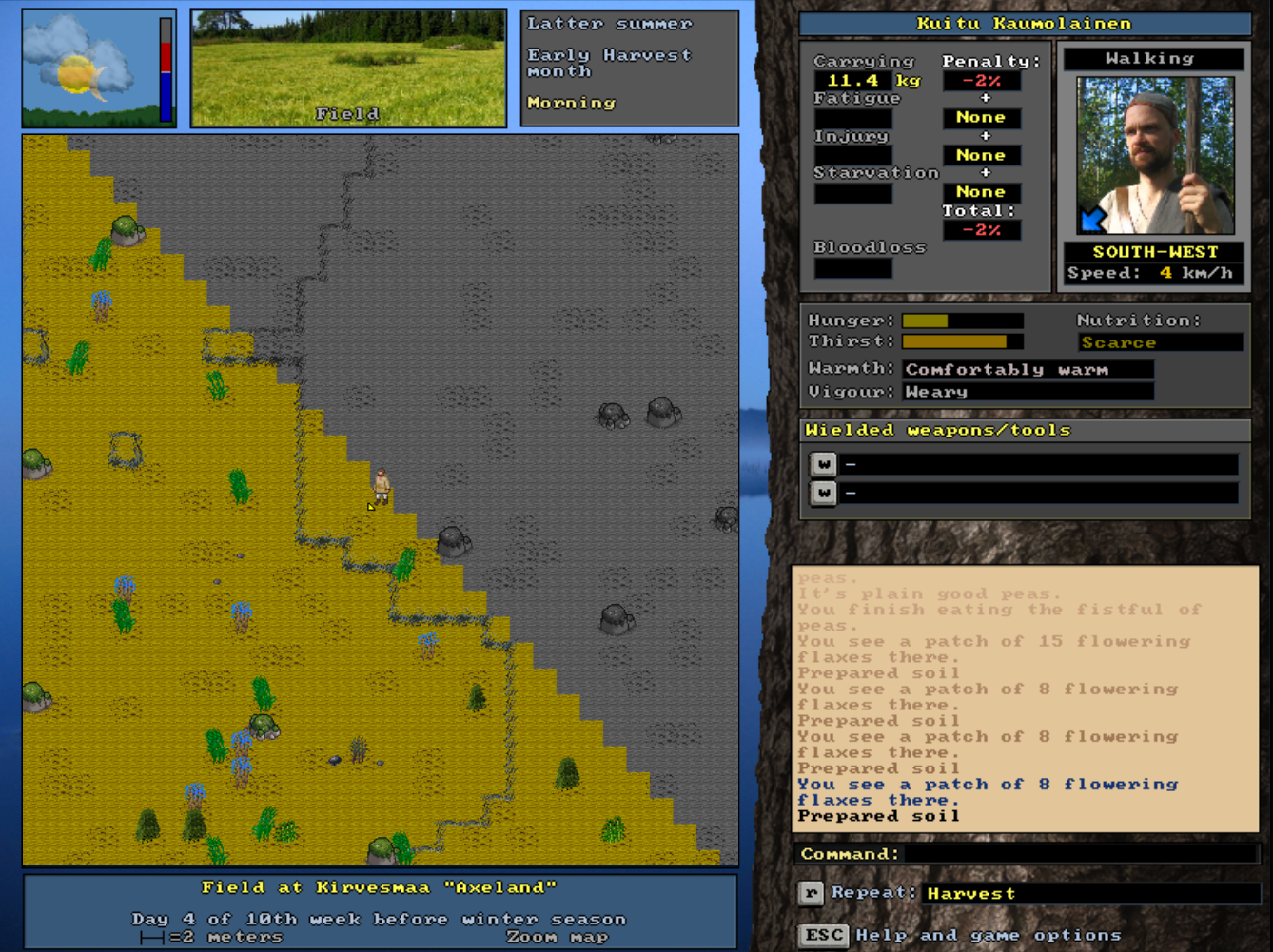 Kuitu Kaumolainen has found his way to Kiesse, a region where flax is grown. At Kaumo where he's from they only produce nettle or hemp fibres. Blue flowering flax is easily spotted from the field, and it could be harvested for fibre already.

Processing plant fibres into yarn involves several stages of work, and it's all done by using your TEXTILECRAFT skill. Character's expertise in textilecraft affects to required working times and the amount of usable fibre or yarn produced.

After the plants are harvested the fibres must be then separated from the plant's stalks. This process is called "retting", and it is done by soaking the plants in the water for several days. Sufficient soaking time depends on the water temperature, with the warmer being faster. 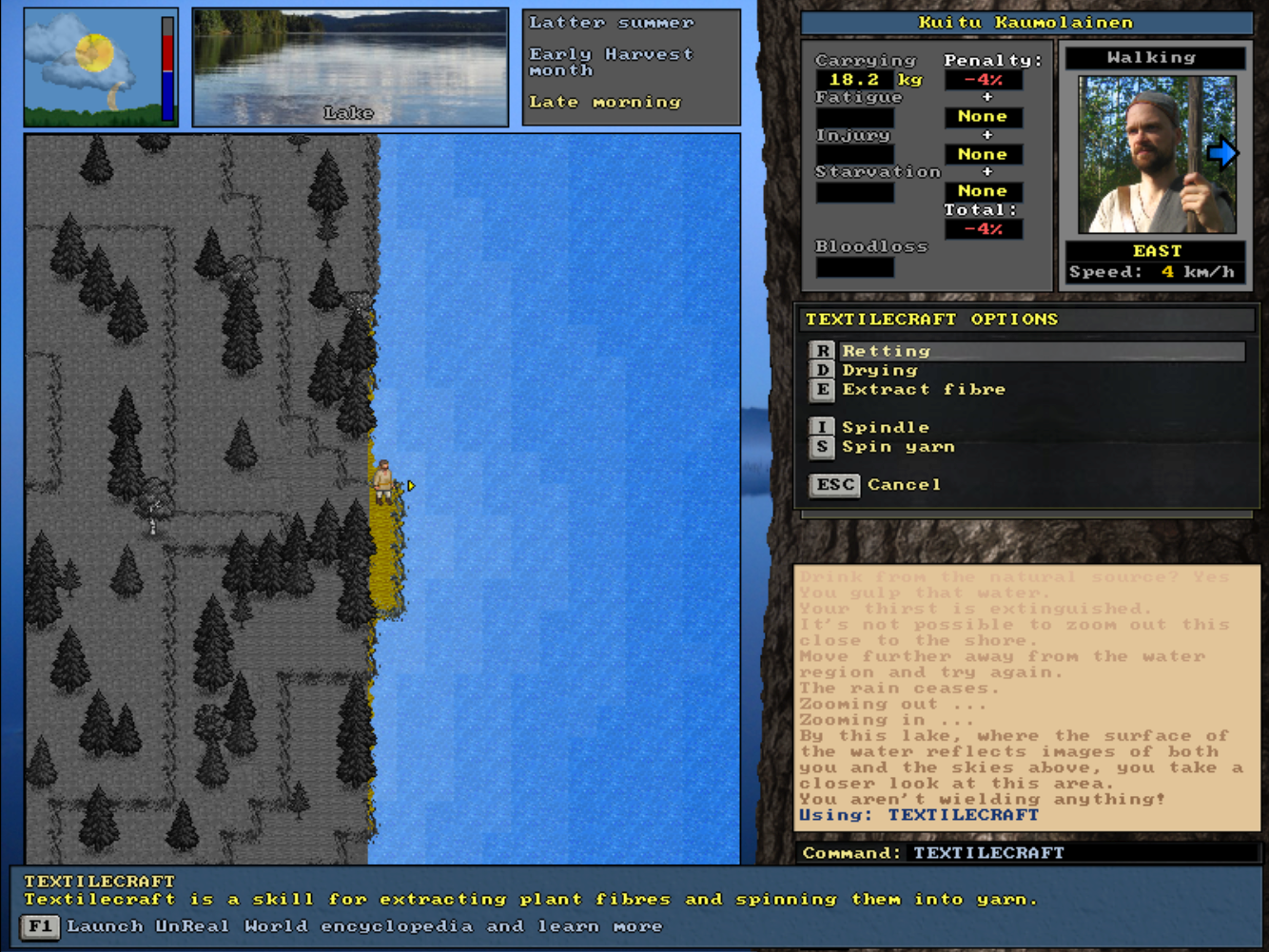 Kuitu Kaumolainen harvested 100 flaxes and headed by the lake to start retting the stalks. Here you can see all the textilecraft options to proceed with fibre extracting and spinning them into yarn.

It took two weeks for Kuitu's flax to soak properly. After that it took one more week to dry them. And only then Kuitu can start extracting the actual fibre from the stalks. Extracting fibres is done by breaking the dried retted stalks so that the woody core shatters and falls away leaving the loose fibres free. The stalks are beated for example with a club on a solid working surface. Extracting fibres is hard work and commonly carried out with several people working together. Traditionally there has been a custom to arrange specific work parties for processing fibres of each village together with the neighbouring people. And in the game your companions can actually help you with the task. Obtained bundles of fibre are then scraped free from remaining coarse parts. Traditionally special tools were used, but it can be also done by rubbing and whacking the bundles against a hard surface, or with tools at hand. 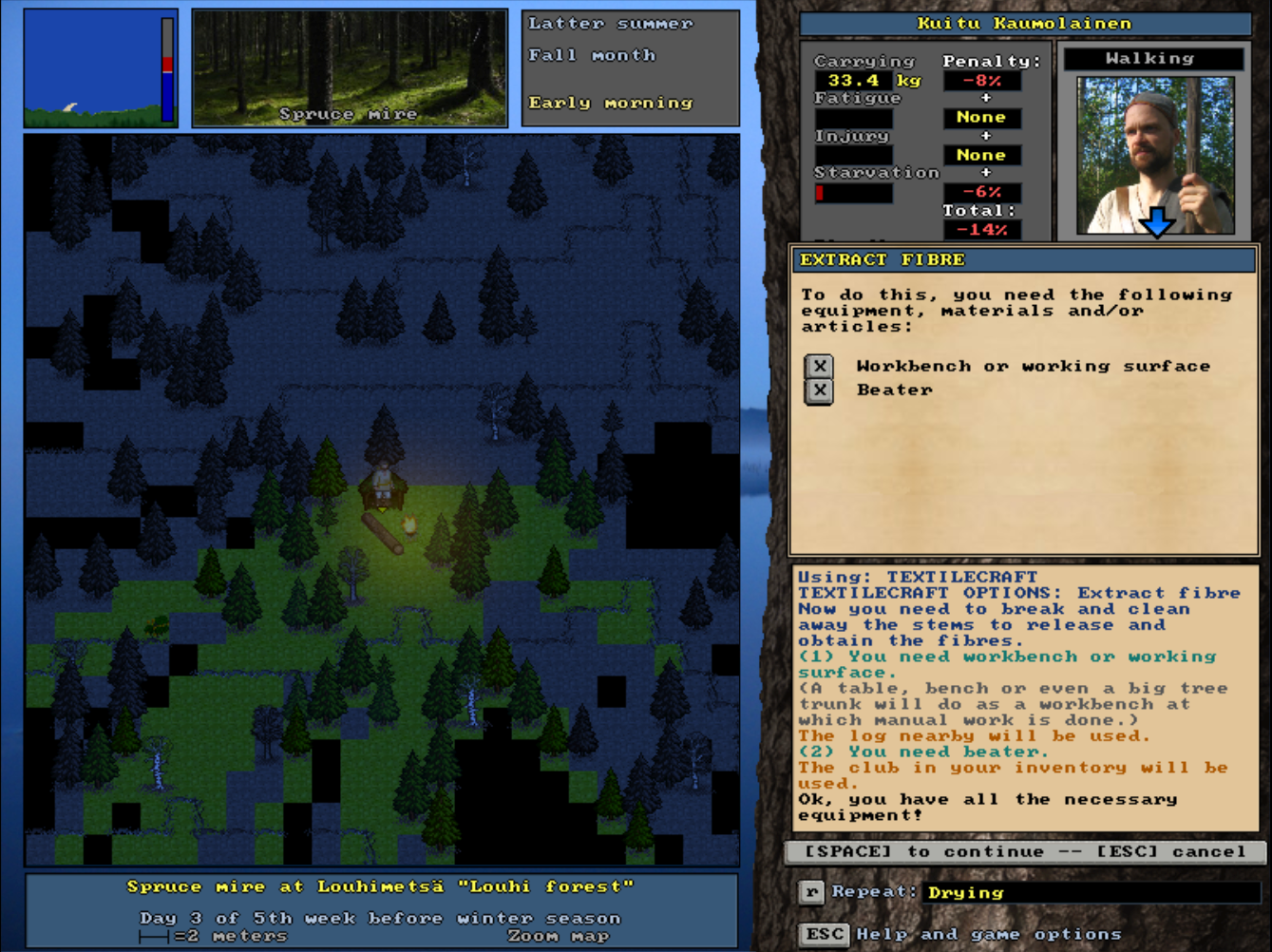 Kuitu starts extracting fibres from the dried retted flax stalks at his shelter. He is about to beat the stalks with a club on top of a log. These dried retted stalks could have been also stored for future and the fibre extracted when there's time and need for that.

It took lees than half an hour to extract the fibres from his 100 flax stalks and Kuitu got 16 bundles of flax fibre. Fibres can be then spun into yarn either by hand, which is slower, or using a spindle. Spindle is also a new craftable item, and very easy to make. So Kuitu crafts a spindle and starts spinning. He decides to go for full length yarn. When starting spinning it is possible to choose how long yarn you wish to spin on one go. 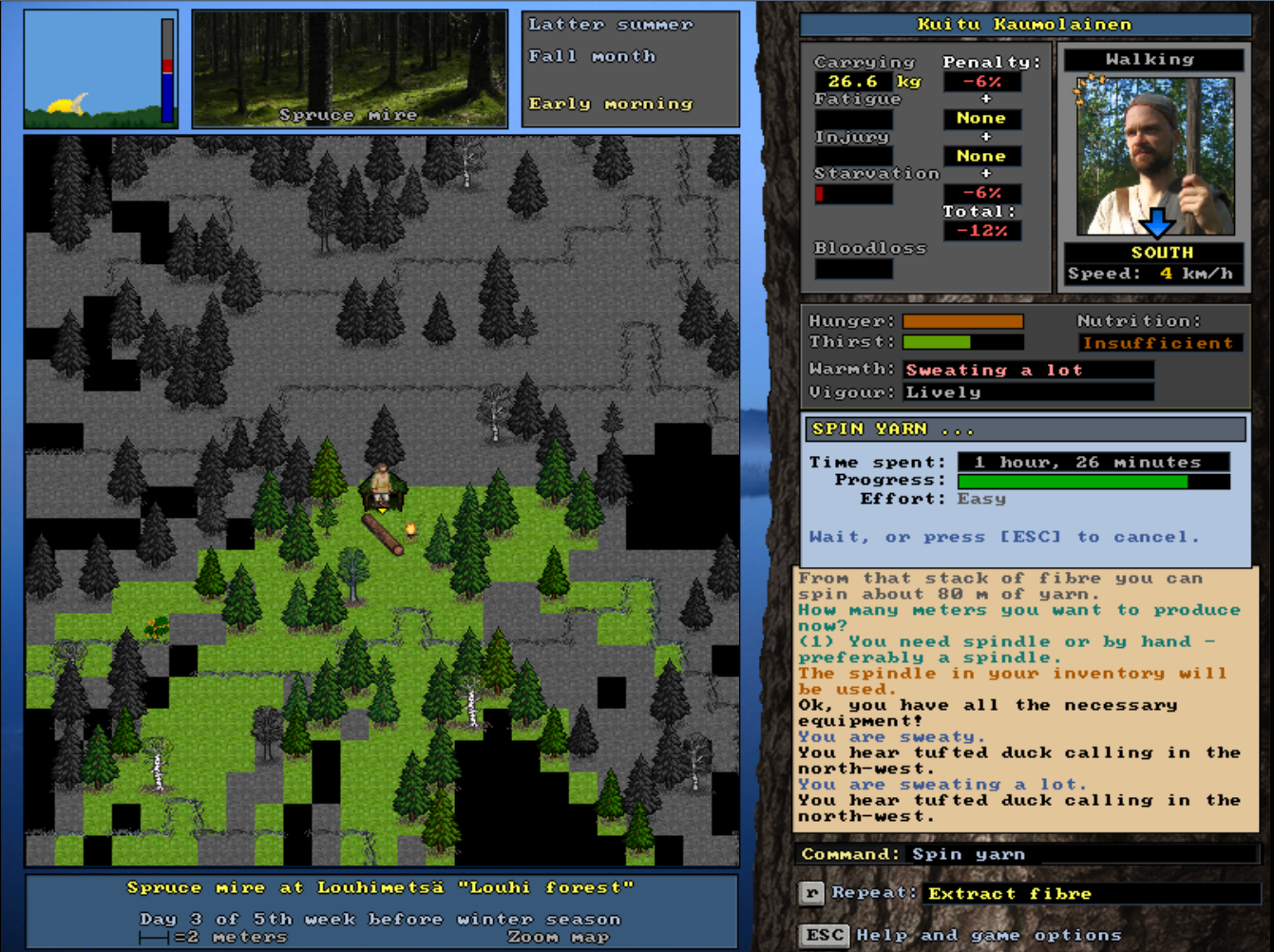 Kuitu manages to spin 80 meters of linen yarn in less than two hours. It could be then used in crafting of different items such as loop snares, arrows - or fishing rods.

In the next version it will be also possible to craft fishing rods, and hooks out of wood or bone. And a working fishing rod naturally needs a line too. Now Kuitu has his linen yarn which could be used as line, but the whole process of extracting flax fibres with retting and drying took weeks. That's quite a long time if there's an urgent need for little piece of yarn.
Luckily there's also faster wilderness condition option for utilizing plant fibres - and that is a nettle.
Nettle fibres are a speciality as they be extracted directly from the fresh plants without retting and drying processes. To do it you can simply use "extract fibre" option directly to freshly harvested nettles. This method takes more time, but is an useful option when only a small amount of fibre is needed.
The nettle stem is crushed by hand, and the fibres carefully stripped off.
It doesn't take long before Kuitu finds some nettles. Textile plant harvesting is made possible for fibre even when they are still growing. 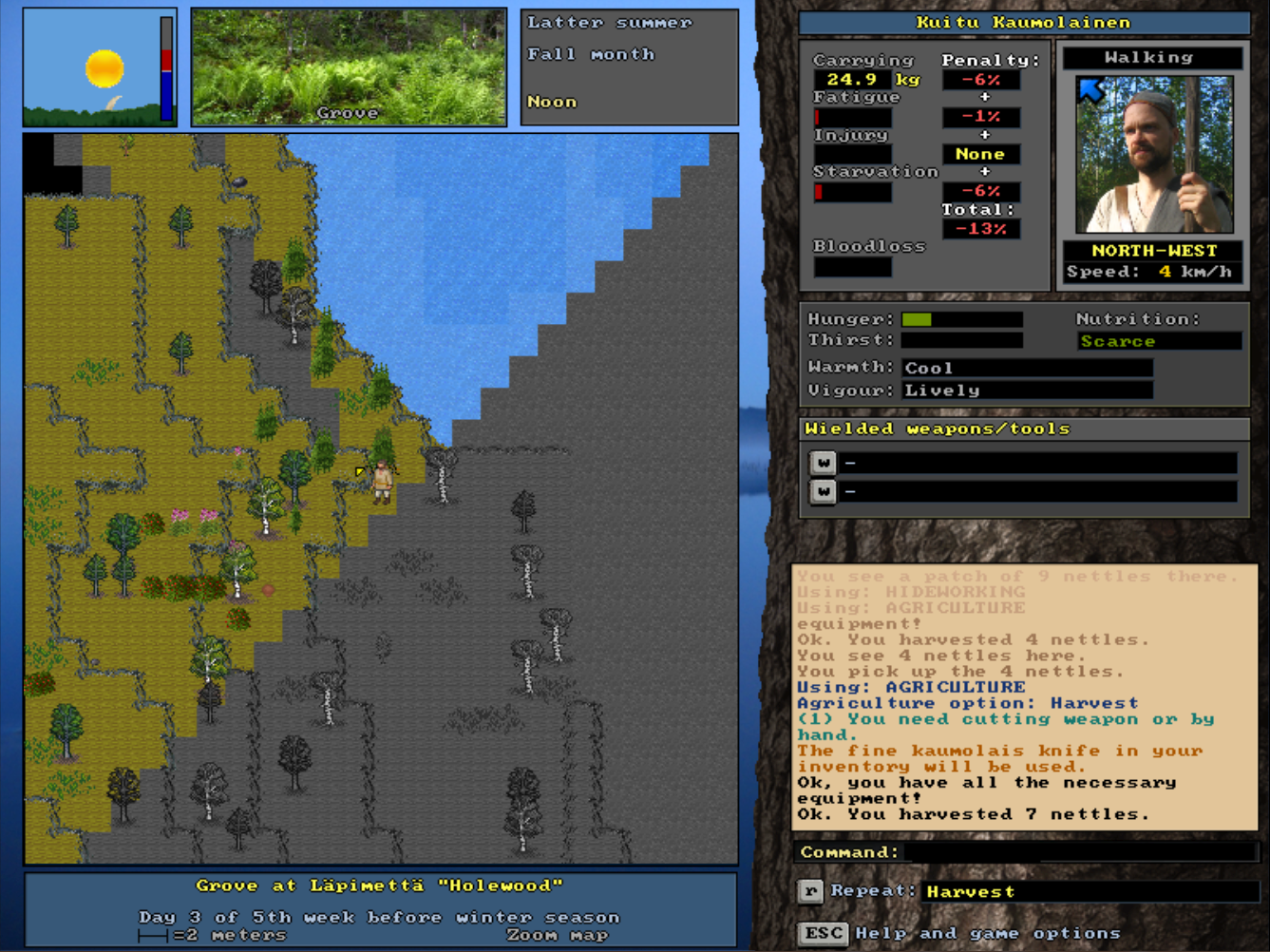 Kuitu harvests some nettles. Then he simply extracts the fibres by hand, and spins some nettle yarn. If he would like to produce a lot of yarn, this would be too slow to be practical, but now he's only after fishing rod line,

Kuitu finds a slender tree trunk, fashions a wooden hook out of a branch, and proceeds to assemble a fishing rod. Now we should mention that In the upcoming version usage of baits in fishing is also  featured. Using baits is not necessary, but naturally highly recommended. Catching a fish every now and then without a bait is still possible, but for reliable rod fishing and decent catches baits are now quite essential.
You can use pretty much every food item as a bait and portion of the selected item will be used during the fishing attempt. Pieces of raw meat and fish can be considered decent baits for predatory fish, but for example crumbs of bread may also work for some fish. You can also use a whole small fish, eg. roach or perch, in order to attract a bigger predatory fish.
With this addition in effect the type of fish caught with rod fishing is now more dependant on the baits used. It's not likely that you'll catch a pike with an empty hook, but having a small roach as a bait might work. And that little roach might have been caught with quite moderate bait such as bread crumb, or even with some tasty vegetation. 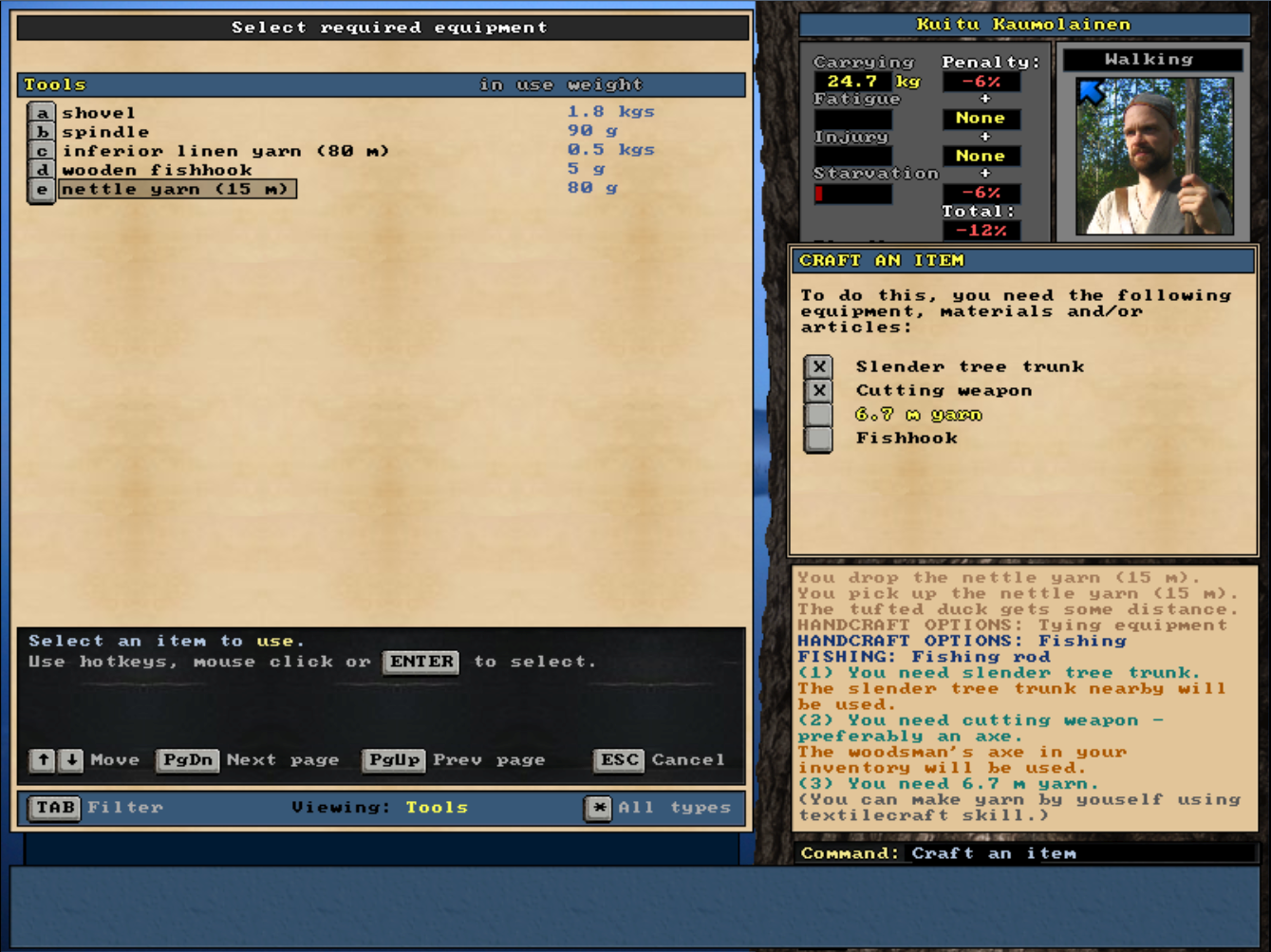 Kuitu makes his survival fishing rod, with a wooden hook and nettle yarn.

The work with the several less laborous features continues but we're getting closer to release every day. It's always quite impossible to say when everything is completely wrapped up and working, but maybe - just maybe - we might have this version out in june.

For those who are more curious about the real life practises here's a short documentary in Finnish showing how the flax is processed. Having read the above I trust you will understand what is happening even without subtitles. The gear used differs slghtly from the more primitive method of the game, but the steps are the same; sow, harvest, ret, dry, extract, spin.