The Moon and The Crust

The last weekend some quite exciting weather engine achievements and accompanying real life adventures were made as Sami (creator) and Erkka (co-designer) spent some creative time together.
Now there are two new essential weather features on the table - both still somewhat under construction, but most likely to be seen in the next version.

And the features are...

Our weather engine now models the moon in detail, with its' changing phases and moonlight affecting to the nighttime visibility and brightness. Lots of tuning is still pending, but we can already see that the full-moon nights in the game will be a different experience.Especially during the darkest seasons moonlight can be a of great help and extended the available hours for working, hunting or traveling. Just have a look at the screenshot compilation below. 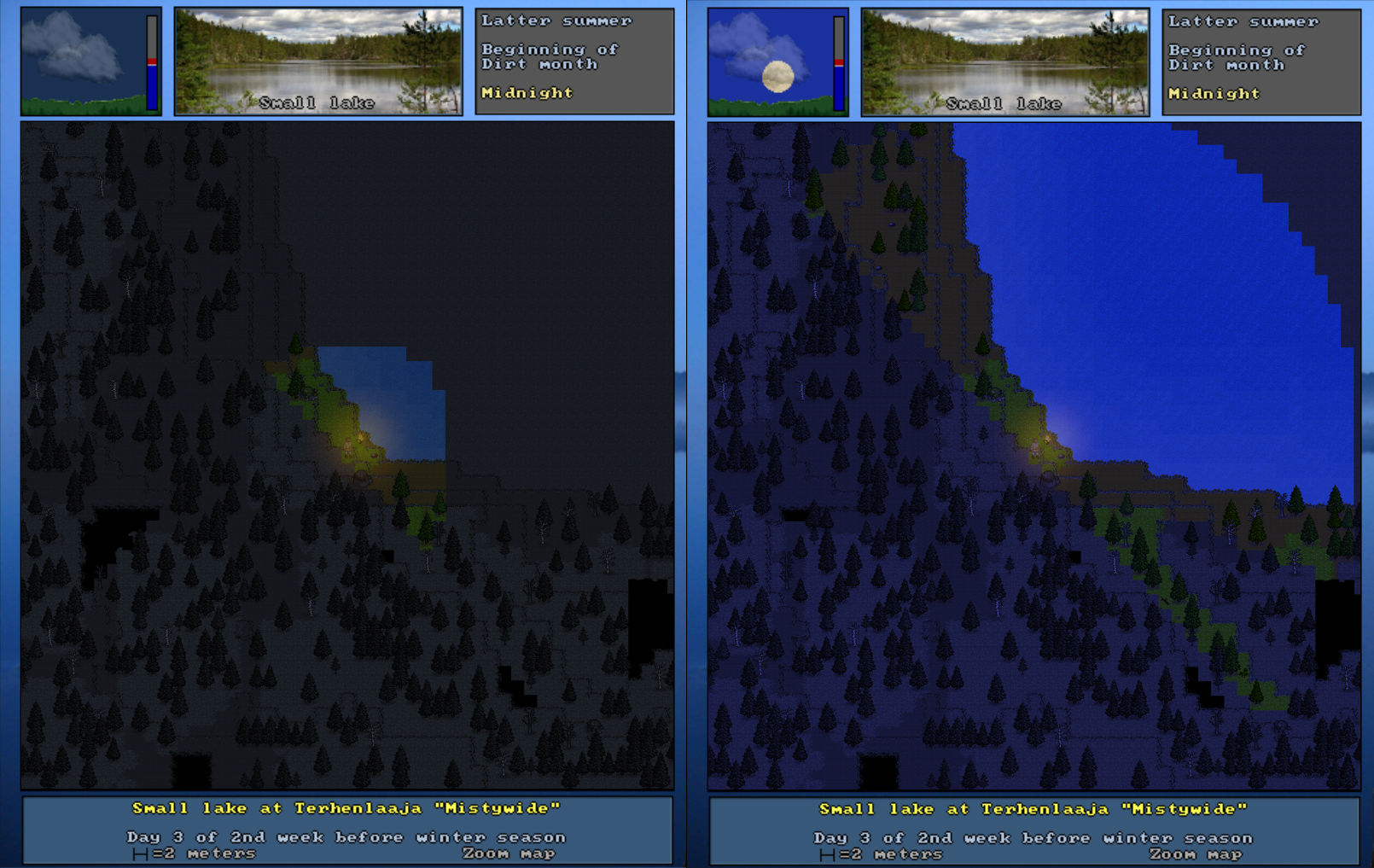 Left: A casual midnight by the lake in dirt month as it appears currently in the game
Right: The same scenery with the new moon code in action. It's full moon and our nighttime visibility is a much different.

Snow crust is a springtime phenomena where surface of the snowpack becomes so hard that it can completely support a walking or skiing person. The crust results from partial melting of the snow surface by warm spring day sunlight followed by re-freezing when the temperature drops again, usually after the sunset. The crust normally only lasts for part of the day, but being able to travel on snow without sinking in there at all is a great asset for a hunter. Elks were traditionally hunted on skis during crust as it can't support the heavy animals and hunter gliding on crust with skis now became much faster than their prey. Lots of work is still needed before snow crust support is all coded, but that's the intention. Now it also requires proper snow penalty to be added for NPCs and animals, and reworking the skiing code to some extent too. (And if you were thinking of skiing NPCs so were we.)

The last weekend it was both full moon and snow crust possibility, so we also went experiencing these things in real life.  Naturally these both are familiar experiences already, and as countryside kids we've learned possibilities of snow crust for work and leisure all the way from our childhood. But if you'd like to see the magic of skiing in moonlight without any artificial light, or get an idea about difference between skiing in slushy spring snow compared  to the crust, we've got a short videoclip for you: